is most commonly diagnosed by a routine liver function test drawn from your blood. The alanine aminotransferase (ALT) is a specific marker for liver inflammation and is typically elevated in individuals with a fatty liver.

How Urea is created: Ammonia from the breakdown of protein, is combined with CO2. Blood urea nitrogen (BUN) or serum urea nitrogen is the end product of the hepatic detoxification of ammonia. It is this parameter that is sometimes also used to assess liver function. Urea nitrogen concentration in blood may decrease with impaired conversion of ammonia to urea by the liver. High BUN Symptoms: Needing to urinate (pee) more often or less often than usual

Ammonia (NH3) is produced as a byproduct of amino acid catabolism. Bacteria in the small intestines produce ammonia from glutamine, and urease-containing bacteria in the colon produce ammonia from breakdown of proteins and urea. Ammonia is taken up from portal blood by hepatocytes and converted to urea through the Krebs-Henseleit cycle (which is also less formally but more aptly known as the “urea cycle”).

Hypomagnesium can lead to low potassium contributes to hyperammonemia by decreasing ammonia excretion.

Liver disorders may increase ammonia, which is transported to the brain, skeletal muscle, and kidneys for elimination.

How important is detoxification?

Toxins are harbored in the body in fat and as such can be difficult to remove from the body. The body in it’s wisdom has coated these harmful toxins in fat globules so that they would cause no harm to other more sensitive tissues, think of a razor blade trapped in a wax ball. In phase one the liver releases these toxins from the fat cells. An example of the phase one pathway is the Cytochrome P-450 mixed-function oxidase enzymes. This pathway converts a toxic chemical into a less harmful chemical.  This is achieved by various chemical reactions (such as oxidation and reduction), and during this process, free radicals are produced, which, if excessive, can damage the liver cells.

However, pesticides and other toxic manmade chemicals can disrupt the P-450 enzyme system.

Antioxidants reduce the damage caused by these free radicals.  If antioxidants are lacking, toxic chemicals become far more dangerous. The best antioxidants to take daily to support your Phase 1 detoxification pathways are antioxidants made from whole foods.  Single vitamins such as Vitamin C or E are not effective as antioxidants, or as true vitamin complexes.  With all our present scientific knowledge we cannot duplicate vitamins in labs.  For example, if you buy Vitamin C as a supplement, you are most likely buying ascorbic acid only.  The complex Vitamin C found in fruits and vegetables is made of seven parts (ascorbic acid, flavonoids, polyphenols, catechin, rutin, and several enzymes) and ascorbic acid is only one of these parts (the outer shell of the vitamin).  Your body requires the full Vitamin C complex found in real foods.  Ascorbic acid alone cannot support Phase 1 detoxification pathway.

Phase 2 of detoxification involves the use of the conjugation process and pathway. Conjugation is the process of a liver cell combining a transfer molecule to a toxic substance. The liver uses sulfur, glycine, cysteine and combines them to toxins making them less harmful and water soluble. These water-soluble components can now be excreted through bile and urine. whereby the liver cells add another substance (eg. cysteine, glycine or a sulfur molecule) to a toxic chemical to render it less harmful.  This makes the toxin water-soluble, so it can then be excreted from the body via watery fluids such as bile or urine.

Through conjugation, the liver is able to turn drugs, hormones and various toxins into excretable substances.

If the phase one and two detoxification pathways become overloaded, there will be a buildup of toxins in the body.  The body encases these dangerous and oftentimes carcinogenic toxins inside fatty globules in an effort to nullify the effects. For example, think of toxins like a razor blades and the body covers in a waxy ball as protection. Once wrapped up, these offensive toxins are then cordoned off to be parked in the fatty areas of the body, such as your belly. The brain and the endocrine (hormonal) glands are fatty organs and are common sites for fat-soluble toxins to accumulate. This may result in symptoms of brain dysfunction and hormonal imbalances, such as infertility, breast pain, menstrual disturbances, adrenal gland exhaustion and early menopause.  Many of these chemicals (e.g. pesticides, petrochemicals) are carcinogenic and have been implicated in the rising incidence of many cancers.

A recent study found the control of estrogen hormones in women was linked to the liver detoxification pathways.  Estrogen is synthesized principally in the ovaries of women, but it is detoxified and eliminated in the body through the various enzymes produced in the liver for detoxification.  The toxic effects of estrogen, therefore, can result not just as an accumulation of excessive production of estrogen from the ovaries or from the consumption of estrogen-containing medications, but also from the poor expression of detoxification enzymes in the liver.  Estrogen hormones were better metabolized and regulated by women in this study whose livers expressed proper detoxification enzyme activity, and this characteristic could be linked to diet.  Women who consume a nutrient-deprived diet that is low in B vitamins, trace minerals and antioxidants may have much more difficulty metabolizing estrogen hormones.  As a consequence, they may be at increased risk of hormone-related health problems, such as fibrocystic disease of the breast, premenstrual tension or even estrogen-induced cancer.

When liver detoxification backs up, as in the case of excessive acute toxicity or chronic toxic burden, these toxic nasties spill back into the blood stream unprocessed.  The next line of defense is the immune system. Liver overload forces or stimulates your immune system to produce inflammatory chemicals and antibodies.  If you frequently deal with swollen glands, infections, fatigue, fibromyalgia or any list of autoimmune diseases.

Immune dysfunction is common in the chemically overloaded environment we live in today and is exacerbated by nutritional deficiencies inherent in processed and high-fat diets.  Suppressive drugs are often used to treat symptoms of immune dysfunction.  Rarely does anyone think about the liver detoxification pathways.  Indeed, the simplest and most effective way to cleanse the blood stream and thus take the load off the immune system is to improve the liver detoxification function.

The Basics of Detoxification 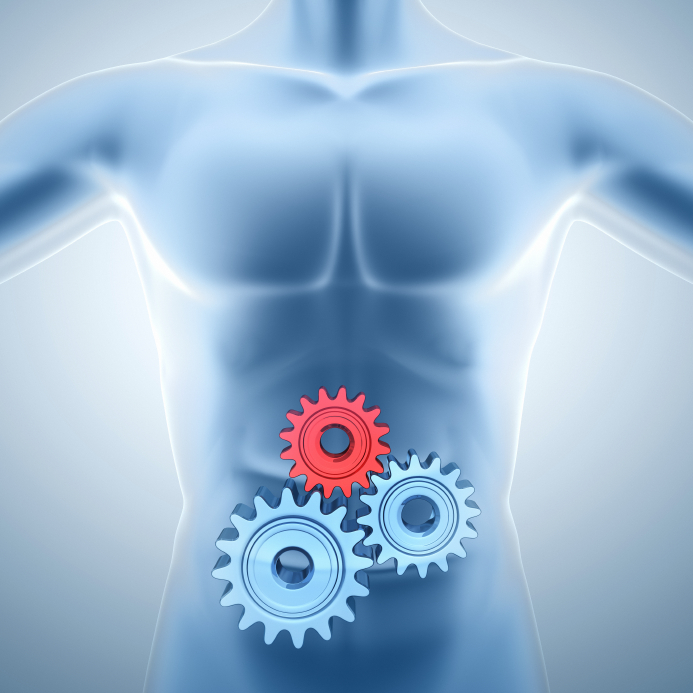 Whether out for a run, grilling your favorite meats on a hot summer day, or spring cleaning the house, our bodies are exposed to millions of chemicals considered “toxins”. These toxins in our environment (exotoxins) and that our bodies produce (endotoxins) have the ability to disrupt the essential biological structures needed for the body to function such as DNA, cellular membranes, and protein. Repeated exposure to various toxins can contribute to adverse health effects in the short-term such as headaches, nausea, and fatigue; and in the long-term can contribute to weight gain and chronic health outcomes.

Detoxification is essential for ridding the body of toxins and preventing their “health robbing” effects. Although all cells have the ability to detoxify toxins, the most important organ for detoxification is the liver–known as the body’s filter and purification system.

Toxins enter the liver as either water- or fat-soluble molecules.  Water-soluble toxins are rather easily metabolized and excreted into the urine. In contrast, fat-soluble toxins can be stored in fat cells where they are protected from the body’s detoxification systems.

Excess fat stores, especially organ-bathing visceral fat, are linked to several diseases such as diabetes, cardiovascular disease, and metabolic dysfunction. The addition of toxin exposure to an overweight or obese individual may only serve to increase these risks (1).

There are three phases of detoxification (2). In the first step, the toxin is metabolized by phase I detoxifying enzymes resulting in an intermediary metabolite. Although there are several phase I enzymes, the most abundant and important are the cytochrome P-450s (P-450s).

After undergoing phase I detoxification many toxins are then subject to phase II detoxification. At its most basic level, phase II enzymes place a water-soluble small molecule onto the toxin.

One of the most important phase II detoxifying enzymes is known as glutathione (GSH) transferase. As the name implies, the GSH transferases transfer a GSH molecule onto the toxin. Like phase I detoxification, this step also serves to make the toxin water-soluble and less toxic to the body.

Besides GSH, the body uses several other molecules to bind to the toxin and increase its solubility including sulfates, amino acids, and glucuronic acid. The use of these water-soluble small molecules makes sense considering that our cells have a surplus of these molecules inside or outside the cell. However, if we’re exposed to excessive amounts of toxins they could rapidly deplete our GSH levels resulting in too little GSH to do what it does best, which is to protect against free radicals and detoxify toxins.

Finally, phase III of detoxification involves the elimination of toxins from cells. In this step, the products of phase I and II reactions are transported out of cells and into the bloodstream for elimination. 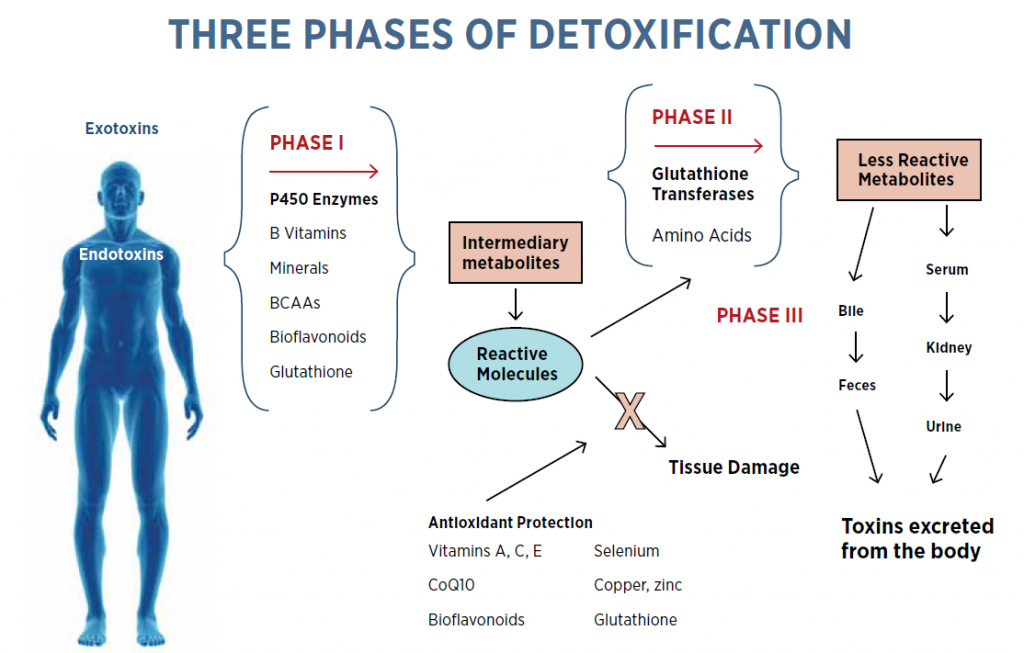 To ensure optimal functioning of our detoxification systems it is essential to have an adequate dietary intake of vitamins (B vitamins, vitamins C, and E), minerals (selenium, zinc, copper), and other bioactive nutrients such as coenzyme Q10 and polyphenols. These nutrients bolster our detoxification defenses either through their roles in phases I, II or III of detoxification or by providing antioxidant support (3). Nutritional support is essential in the detoxification process because some toxins are produced as the result of free radicals. Additionally, nutritional support is needed to counteract the oxidative damage caused by toxins.

Plant botanicals including ashwagandha, aloe vera, and turmeric (Cleanse for Life), milk thistle (Product B), resveratrol, and other antioxidant vitamins and botanicals (Ageless Essential Daily Pak) have all been shown to improve detoxification. Beyond these micronutrients, the detoxification system also needs an adequate source of the amino acid cysteine, the sulfur-containing amino acid essential for GSH production. Luckily, cysteine is abundant in whey protein found in IsaLean Shakes,Bars, and Soups.

Although not yet extensively examined in humans, subjecting animals to calorie restriction (CR) or intermittent fasting (IF) has also been shown to increase efficiency of detoxification pathways. The precise mechanisms responsible for the benefits of CR or IF on detoxification are unclear, but it’s thought that these two cleansing protocols “turn on” genes that increase synthesis of our detoxification enzymes within the phase I, II or III pathways.

Additionally, the reduction of fat mass—the primary target for toxin storage—stimulates the release of toxins into the circulation. Once in the bloodstream toxins are more easily metabolized and excreted from the body. When the body has the additional nutritional support of amino acids, vitamins, polyphenols, and other bioactive ingredients, the detoxification enzymes can perform at peak function.

The Isagenix system ingeniously incorporates both intermittent fasting on Cleanse Days and calorie restriction on Shake Days to help you burn fat and stimulate the release of fat-stored toxins. The polyphenol-rich nutrients and plant extracts found in Cleanse For Life provide plant-based antioxidants (4-7) that support the detoxification enzymes responsible for toxin elimination. Also, the whey protein in IsaLean Shake supplies essential amino acids such as cysteine that can boost GSH production (8,9) and facilitate toxin removal.